Ever heard of Star Citizen?

For this series, I’d like to talk briefly about up-and-coming or little-known games which I think seem cool. The first is Star Citizen, a crowd-funded independently-published Open-World space MMO. 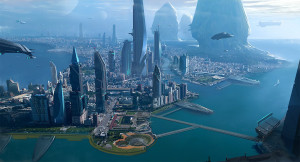 Set about 800 years in the future, Star Citizen lets you create your own story and experiences through a variety of missions, careers, professions and skills. You can earn “credits” and build a fleet of ships to start your own cargo company, buy weapons and carry out Spec Ops missions, and so much more.

The game’s art style reminds me of a blend of Star Wars and Firefly. The ships have a realistic and sometimes clunky feel to them. Right now all we have is videos of the “hangar module,” and early-access preview for early supporters.

Overall, I’d say it’s too early to make a call on Star Citizen but it’s visually stunning and awesome in concept. I certainly have high hopes for it and will be keeping an eager eye on it.

For more information and to see how you can support the development of Star Citizen, see the video below and check out RobertsSpaceIndustries.com.