I was pretty let down by the fact that I had not found an M4 in all the servers I had joined in my search, so I logged back the next day to try again. 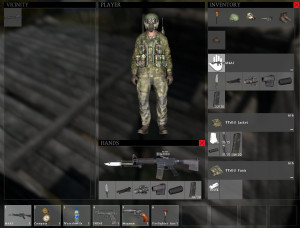 I spent the night looting the Northern Airfield once more, this time in a low pop server. I got lucky and found a nice M4 behind the stairs at the TEC building! I rushed to the tents to get pristine parts and some optics. In no time at all, I had all pristine parts with a suppressor, bayonet, CQ Stock, bipod, two RD sights, 40- 30- and 60-round mags, and a ton of confidence.

I decided to head out to Devil’s Castle, a name that sounded fucking awesome. I wanted to know what that was. I’ve never played the mod, so I’m not fully familiar with the Chernarus Plus map. It took 30 minutes and a few stops to check my compass and correct my heading, but I made it out! I immediately recognized the castle from a DevildogGamer video from a few months ago.

Sat on a rock to admire the sunset. 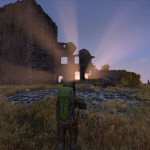 This place is both beautiful and eerie. 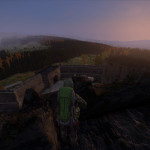 The view from the tallest tower.

I upped the graphics to high and took some screenshots, then headed east to Gvodzno, where nightfall was upon me. I hate the current way night looks on DayZ SA, so I don’t play night time at all. I logged out and decided to contact my first ever DayZ buddy, Link.

I sent link a message later in the evening and told him I was loaded with guns an ammo and we should totally tear it up together. He immediately joined me. It took a bit for us to meet at the airfield, and we started looking through the tents for stuff for Link. As is customary with my luck, I fell from a watchtower and broke my legs. I had awesome gear but no way to fix this. After a few minutes of Link running around looking for something, but coming up empty, I told him to shoot me in the head! He asked me if that’s what I really wanted and I cried a bit and told him to do it. I would respawn and make it back to my body to gather my gear.

After a few attempts, I was able to spawn back. This time I was far as fuck; in Kamyshovo. As I made my way back to my previous body at the tents in the airfield, the server decided to reset. When we logged back in, Link confirmed my body, and gear, was all gone. I told him to just post up overwatch at the airfield and I would make it there and look for gear all over.

When I first got DayZ, and perhaps before that, I knew there would be times when I would die and/or lose all my stuff. Starting over is something I’ve never had a problem with, it’s part of the DayZ experience. My journey took me through Mogilevka, Vyshnoye, and back to Stary and Kabanino, before heading out to the military base there.

On my way out of Stary Sobor, Link took some fire from the hangars in the airfield. He shot back but couldn’t confirm the kill. As I made it to the military base, me decided to climb down the ladder from the fire station’s tower roof. As he did, he glitched and fell to his death on the fire station’s second story roof. He raged, understandably, and spawned back. Luckily for him, he was at Novy Sobor, just fifteen minutes away!

I rummaged through the military base, found nothing of much value except camo gear, and raced to secure Link’s body with his M4. I made it to the airfield fire station in no time, climbed the side ladder and took Link’s M4 and scanned the area. I saw no one near the hangars and kept an eye out while I looked for my own M4. Link was there in a fucking flash. He took his gear and weapon, and gave me an FNX45. We raced to the tents, knowing full well that in a server with almost 20 players, it was very likely there would be others there.

At the tents, we didn’t see anyone, but as soon as we started searching, Link found a dead player! I raced to cover the area with him. The guy had just some food on him, which told me he might have been looted by someone else. We hadn’t heard any shots, so we figured this was a while back. We continued searching the tents, but within a minute, I heard a single shot go off right in the tents.

I yelled to Link on teamSpeak and he said he didn’t hear anything, but I knew what I had heard. While he continued looking for an M4 or Mosin for me, I had my .45 out and raised. I crouched slowly tent by tent until I got to the very last one. As I step inside, I see a dead body in the middle of the tent and a player next to it with a .45 drawn. I immediately yell “LINK, IS THAT YOU???!!” and before he can finish saying “No!” I pop 8 rounds into the guy. 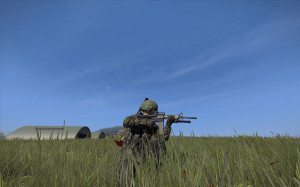 He had just turned to face me and fired off a shot before missing and dropping to the ground dead. My first DayZ kill! My heart was racing and I tried to tell Link where I was, but instead I kept blabbering on and opening my inventory, for whatever fucking reason. When he made it to the tent, We noticed the two guys had M4s and enough ammo to last a nuclear winter. After quickly sorting through their stuff, we left fully geared and ready for battle. We headed back towards Devil’s Castle, Krasnostav, and the North Eastern Airfield, where the server reset and we called it a night.

What an experience. Looking back, I have no regrets. I have no desire to kill anyone on DayZ, whether armed or not, but this guy had most likely killed two other players (perhaps in self defense) and would have shot and killed me in a heartbeat. I’m sure he knew we were there, because he was using third-person perspective to look outside when I ran into him. 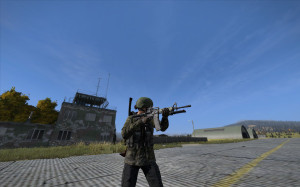 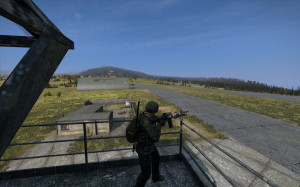 It was exhilarating and just awesome. DayZ is quickly growing on me.

This site uses Akismet to reduce spam. Learn how your comment data is processed.