Last week I met a Belgian redditor (we’ll call him ‘TheButcher’) in a DayZ meetup subreddit. We joined up on a First Person (previously ‘Hardcore’) server to try and find a tent. Neither of us had used, or even seen a tent before. They have just been added to the game in the last patch. 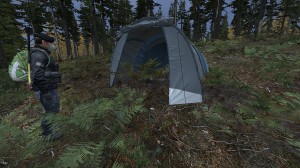 When we logged in we were fully geared: he had an M4 and I had a carbine. I was near Gvozdno and he was west of NWA so we decided to meet at the hangars in the NWA. On the way there, I decided to check a hunter’s hut in the woods. I found a tent! I celebrated on TS and decided to set it up in a wooded area with good cover and lots of rocks around. 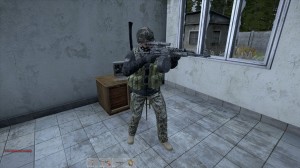 Once we met, we decided to loot the airfield and the barracks, starting with the tent city, where we found an AKM and drum-mag. While there, we ran into another fully geared player whom I startled. I was lucky he didn’t shoot me. He was headed east to meet with his buddies. He said they weren’t friendly and would eventually kill us, so it’s best to avoid the coast. We agreed and after a couple of minutes, we said goodbye to ‘Diesel’ and dashed back to our tent to store weapons and ammo. We dropped off pistols with mags, ammo, food, a can opener, and the carbine with a mag before we headed to explore the new town in the NW part of the map. 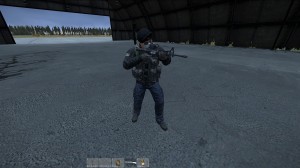 As we were crossing the field between the runways at NWA, TheButcher yells “Drop to the ground, there’s a player in the hangars!” as he goes completely prone in the grass. I crouch and start searching and asking him which hangar. Using the AKM scope, I locate the guy. 150 meters running into a hangar. M4 in hand, Camo gear, Hunter’s backpack. My friendly attitude is aggressively conflicting with my survival instinct. I commit. I shoot.

First single pop hits his back between the shoulders. He’s bleeding and running. A few more shots and I land another single hit to his right arm. He’s now behind cover inside the hangar. There’s no escape for him. I slowly strafe left, sharply focusing on the only corner he can peek. He makes a run out of the hangar. Pop, pop. He’s down.

As I was engaging this guy, TheButcher was scanning the area for others, but there was no one else. We ran to loot him. Took all his ammo, but nothing more. Before we hid his body we checked his pulse. ‘Diesel has no pulse.’ Fuck. What was he still doing here? We’d been gone for over twenty minutes. He should have been at the coast by now. Was he waiting on his buddies to hunt TheButcher and I? We no longer gave a fuck. We had to stay alert and get the fuck out of the area. 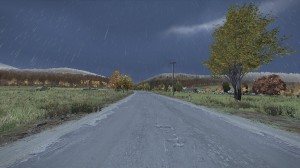 We made it to the bus depot at Vavilovo in no time. What a cool building. We need more building diversity in DayZ. I’m sick of the same ten or twelve models of houses in every town. Same police station, same market, same school and hospital. This was nice. It’s similar to the truck depot at Stary, but with busses. As we traveled north to Sinistok, we looked for game to hunt, but found none. A bit of exploring around Toploniki and we headed back to the Jail complex on the hill at Bashnya, north of the NW Airfield. If only we knew what was going to go down there, we would have gone around it.

The complex looked empty and safe to loot. The gates and doors were closed so we moved in and found some loot. As we stepped outside the jail building, I had my inventory open and saw my drum mag disappear from my AKM. As I’m telling TheButcher about it, he says “Player! Player!” I asked where and he said “Right next to us!” 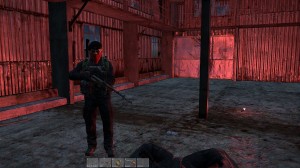 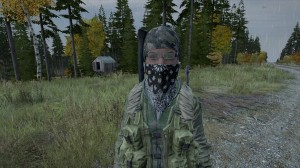 I freaked out and looked around frantically. I saw TheButcher with his weapon raised leaning and aiming around the stairs. He fires two shots. I hear full auto fire from another M4, then his. He’s dead. “I’m dead! WTF” he says. I ran behind the shed looking for another magazine in my improvised backpack. In my panic, I didn’t think to just press reload. I switch to my Magnum to kill a zombie. Click! Click! Not fucking loaded! I reload. ‘The Magnum is full.’ What?! Eventually I figure it out and reload a 30-round mag onto my AKM. I go looking for the guy and find him dead five feet from TheButcher’s body. Tap once through his head.

I took TheButcher’s M4 and ran back to our tent. He spawned on the coast and ran back as fast as he could. One he got his M4 back, we went back to the hill to check up on the situation there. No one around and the guy’s body had disappeared. We decided that was enough chaos for one night and logged off. 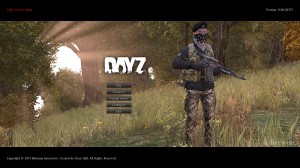 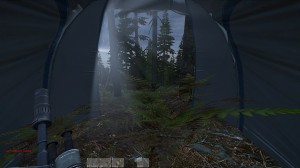 Scratch another notch on my hypothetical kills-belt. That was an intense and fun night.